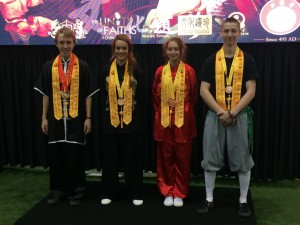 On Saturday 11th October the Black Dragon Competitors ventured out on an early morning trip up to The London Soccerdome to take part in the competition as part of the 3rd Cultural Shaolin Festival.

Taking part in the prestigious competition were: Ruby Pierce, Ashleigh Wykes, Harry Adaway and Liam Fitz-Patrick; all of whom were most excited to see the world famous Abbot Shi Yongxin and perform in front of the renowned Shaolin monks.

Teams came from far and wide from countries like America, Slovakia, Spain and many more including the U.K. Black Dragon; one of the smallest clubs at the competition had one of the most successful results.

The day’s proceedings began with an opening speech from the Abbot himself and a ceremony of praise and respect to the Abbot, which consisted of all of the Shifus leading their clubs and paying respects to the Abbot and his Disciples.

With almost no break; the competition was under way and the usual chaos began.

The competition involved well over 50 categories which took place over 8 arenas, with all of our competitors performing in multiple arenas at different times; it was difficult to keep track of who was scoring well and how their challengers were doing in comparison.

All four competitors took part in both hand and various weapon categories with some also taking part in the Tai Chi sections. It was obvious from the beginning that the standard of competition would be higher than we had experienced before.

Liam who was taking part in his very first competition demonstrated his speed and power in the Dragon Hand form and Shaolin Broad Sword form achieving a Bronze Medal.

Ashleigh exhibited great flexibility and composure with her Dragon and Tai Chi Hand forms and her Fan and Broad Sword form which resulted in her getting a bronze medal.

Overall, a great medal count for the Black Dragon team as per usual with 7 medals in total which is more than respectable considering that they were being judged by the Shaolin monks themselves.

Aside from the intense competitions taking place; there was also the opportunity throughout the day to experience many workshops, see performances from different schools, sample the delights of real Chinese cuisine and view some of Chinas ancient pieces of art in the Zodiac exhibition.

The day ended with high spirits at the medal ceremony with our competitors receiving their medals from grandmasters in front off the infamous Abbot.

With our continued success we have to give thanks to our Shifu because without his knowledge and training we wouldn’t be able to celebrate our students as much as we do, we look forward to this success continuing in the future.