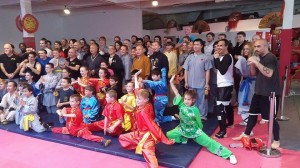 On Saturday 26th September members of the Black Dragon Family were lucky enough to be invited to compete in the Team Shaolin Championships 2015 at the Tang Long Chinese Cultural Centre in London.

On arrival at Tang Long we immediately felt at home and welcomed as the cultural centre has the same feeling as our very own school. Being a Shaolin competition it was very well organised and with only one arena, competitors who were in multiple categories did not have the stress found in other competitions of being in different places at the same time. For spectators this meant that they could watch everybody.

The team included Ruby Pierce, Katie Hobbs, Ashleigh Wykes, Harry Adaway, Liam Fitzpatrick and Lewis Thompson. The day began with impressive forms both weapons and hand by junior competitors, some of these stood out with their speed, agility and skill. It also gave some of the junior competitors a chance to display their true potential and they will be ones to watch in the future. It was obvious from the onset of the day that being a Shaolin competition the bars would be set high and performances would be to a very high standard due to the training and knowledge that everyone involved had access to. We were also very impressed at the standard of judging when compared to that of previous competitions.

Ruby Pierce started the day by showing the Eagle form with her usual grace and elegance which she then followed up with a strong spear performance, narrowly missing out on medals for these two. However, her demonstration of her Fan and Tai Chi hand form earned her a gold and a bronze medal in that order. Well done Ruby. Katie who was taking part in her second competition showed her grace by performing a Fan form and Tong Bei, unfortunately Katie did not receive a medal. Ashleigh showed her skills throughout the competition by taking part in four categories. Her first category to compete in was the Tai Chi hand form which she managed to get a bronze medal in, she then took the stage with her Tai Chi Straight sword walking away with a silver medal, meaning Ruby and Ashleigh placed first and second for that category. Ashleigh Wykes continued to work hard through the kung fu categories showing the Black Dragon hand form and a Shaolin Broad Sword and narrowly missed out on medal positions. Harry’s first form of the day was the Black Dragon Tai Chi form of which he missed out on a medal position. He managed to redeem himself with a silver medal in the Spear form shortly after. He was next up in the kung fu hand form category in which he displayed one of our Black Dragon Hand Forms earning a well deserved bronze, finally he earned another bronze medal showing the Black Dragon Straight Sword Form. Liam fresh from his first week at university performed a solid Hong Quan and a similarly strong Broad Sword display, however because of the competition quality he wasn’t lucky enough at this competition to walk away with a medal. This competition saw Lewis competing again after a extended break from competing, he competed in the Baji Quan, Broad Sword and Tai Chi hand form categories but wasn’t fortunate enough to overcome the strong opposition.

The day finished with full contact San da fighting from the other school which was very entertaining to watch and become immersed in after a stressful day. All that is left to say is a big thank you to everyone who came and supported us especially our Shifu without who we would not have been in this successful position. A huge thank you to all at Tang Long including Shifu Shi Heng Wei and Shifu Heng Xuan for putting on a great day for all. We hope to be able to compete there in the future.